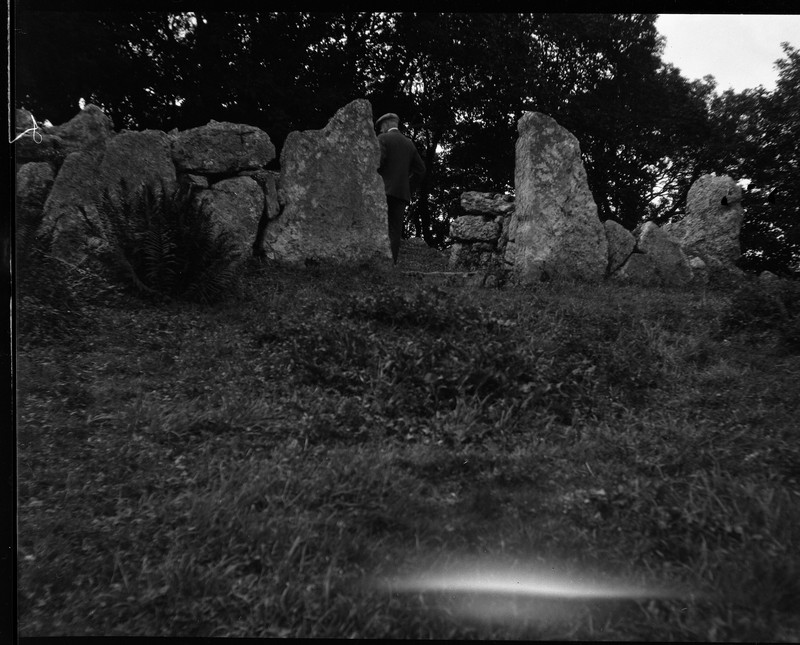 {- per class31 on HEIRtagger: Location suggested.

per CADW email:
"Thank you for your email regarding the photograph, I can confirm it is Din Lligwy Ancient Village on Anglesey.

This photo (In HEIR folder on desktop)
Is from the Cadw archive, which shows this part of the monument at a slightly different angle but it is still possible to match up the stones.

The monument description is below

The monument consists of several enclosed hut circles, the foundations of round houses probably dating to the Bronze Age or Iron Age (c.2300 BC - AD 74). The site lies close to the steep north-west edge of a limestone plateau which slopes gradually from west to east. The enclosing walls are built in straight lengths and form an irregular pentagon covering more than half an acre. The overall measurements of the enclosure are: 50m north to south and 60m east to west. The wall is from 1m to 1.5m thick and consists of two rows of facing slabs of limestone, with rubble filling between. The entrance, now ruined, is in the north east wall, and leads through a rectangular enclosure. The remains consist of two circular and seven rectangular buildings, and in addition there are two rectangular foundations outside the wall on the southern side. The average height of the hut walls is 1m to 1.5m and where best preserved they stand to 2m. The average height of the enclosing walls is 1.2m. Some of the stones in the walls are of very large size, and a few are as much as 3m long.

This is an image of the site from last year – It hasn’t changed much at all as its under guardianship. (See HEIR folder on desktop)
The round house that is in your image is the furthest one seen here. You can zoom in to make out the entrance way stones which identify it as being the same.
Hope this helps
Best wishes
Adele"